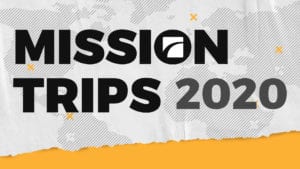 In the year of 2020, our Calvary family is venturing out to share the Gospel in over seven countries! You can partner with us by carrying the Gospel to the ends of the earth. All of our trips are available on our website at

Join us on Friday and Saturday, February 28-29 for an outdoor camping weekend to connect with other men in the church and encourage one another. The cost is $75. For more information and to register, visit

New Series | Once and For All

Be sure to tune in for our new sermon series, Once and For All: A Study of Jude taught by Dr. Willy Rice beginning on Sunday, February

Whether you’re single, dating, married or divorced, you can learn how to develop Christ-Centered relationships at the Let’s Get Real Marriage Conference. This event will be hosted at our Seminole Campus on Friday and Saturday, March 6th-7th. For